The Covid-19 crisis has placed Swedish medtech company Getinge in an unusual spot. While demand for its life-sustaining ventilators have increased at a record pace, the global production chains are stalling. Here’s how Getinge managed to step up its global production, secure increased financing – and reopen a shutdown plant in Malaysia.

Swedish medtech company Getinge has been trough a couple of hectic months. The Gothenburg-based company has worked hard to more than double its production of ventilators – at short notice.

Early March, newspapers reported that Getinge had secured a large order from Italy for 500 ventilators. Anna Appelqvist, Vice President Corporate Communications at Getinge, says demand started to increase even before that.

“Already in January, we witnessed a global rise in demand of, above all, ventilators, life-supporting heart-lung systems and hemodynamic monitoring. Our clients are found all over the world and the demand has tailed the virus breakout. In the beginning, the bulk of orders came from Asia, but now there are more coming in from Europe and North America.”

Ventilators from Getinge contain thousands of components sourced from suppliers in China, Malaysia and Europe, and elsewhere. How do you manage an increase in production at a time when borders are closing and production chains across the world are being shut down? Peter Hjalmarson, Group Treasurer at Getinge, points out that the company’s collaboration with subcontractors, business representatives and politically appointed officials has been extremely important, and he offers an example: 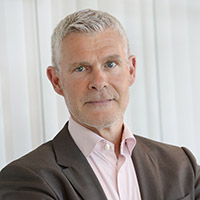 Those responsible in Malaysia were not aware of how critical this component is – not just to Getinge as such, but to global health in general.

“In the first half of March we learned that the plant in Malaysia – where one of the most crucial components of our ventilator is manufactured – was shut down for virus protection reasons. Those responsible in Malaysia were not aware of how critical this component is, not just to Getinge as such, but to global health in general. Getinge supplies some 25 percent of the world market for this type of advanced ventilators, which are critical to keep patients alive during the pandemic.

A member of the Getinge Group Board contacted a senior political official in Sweden, who in turn informed those responsible in Malaysia about the importance of this particular factory. A targeted effort in Malaysia ensured the operations started up again.

“Unexpectedly swift and painless, this really goes to show the difference you can make when you have the support of the political system,” notes Hjalmarson.

Getinge’s subcontractors also have to increase their production capacity if Getinge is to meet the revised production targets. In order not to put pressure on them, Getinge avoids asking for credit; instead, the company asks its customers to pay a portion of the sales price in advance. The company also seeks to spread information on available financing alternatives.

“Increasing the production entails costs, at least initially, which is why I have written to our Swedish plants to let them know that Swedish subcontractors that need financial support may turn to EKN for cover of 80 percent of their credit risk. This guarantee increases the chances of credit approval from the bank if they need a loan,” says Hjalmarson.

To meet its own future liquidity needs, Getinge raised one billion SEK on April 17 by emitting commercial papers aimed to finance increased production of equipment used against Covid-19. Among the investors were the investment company Ramsbury Invest controlled by the Persson family that founded H&M, and the fund management company Spiltan Fonder. In addition, Getinge turned to EKN to make use of the new guarantee instrument for large companies where EKN takes on 75 percent of the credit risk.

“We don’t have any liquidity problems right now, quite the opposite, but in an uncertain world we believe it’s important to expand our liquidity reserves. That’s why we have applied for EKN’s new guarantee and we are in talks with several banks about expanding our credit. While a company such as Getinge is capable of raising funds on its own merits, it makes it easier for the credit institutions if the Government covers 75 percent of the risk.”

Delegates from EKN worked hard at COP27 to raise awareness of the role of export financing in funding the transition.

A new guarantee from EKN secures the supply of strategic raw materials to importers by covering the risk of new investments for raw material producers.