Supported by triple-A-backed funding and risk coverage, Swedish industries offer solutions to the challenges of the energy transition, from fossil-free transportation and industrial production to sustainable mining and infrastructure for renewable energy production.

There is no shortage of challenges along the road to a more sustainable world. In meeting these challenges, Swedish know-how and technology from a wide range of sectors combine to build sustainable value chains – from equipment for sustainable mining and connectivity for digitalised factories to sustainable energy production and clean water.

“Sweden has what the world needs to make the transition happen and attractive financing from the Swedish export credit system makes a good deal even better,” says Marie Aglert, Head of Large Corporates at EKN.

“Investments in green energy and green transportation are rarely profitable in a short-term perspective. Financing via export credits where an ECA covers the risk lowers the investment threshold for sustainable investments and helps attract private capital.”

Swedish manufacturers have relied on exports since the Industrial Revolution of the 19th century. “To reach the necessary economies of scale and a rate of innovation to impress buyers worldwide, Swedish companies have focused on exports since day one,” says Aglert.

With an industrial base founded on mining, steel production, forestry, and power generation from hydrogen and other renewable sources, Sweden brings experience in sectors that are particularly relevant when facing the massive challenges of our time.

The government initiative Fossil-free Sweden, for example, has launched 22 roadmaps for industries where Sweden has a strong track record in exports, such as steel production, transportation and mining equipment. HYBRIT, which stands for “hydrogen breakthrough ironmaking technology”, offers a case in point. This is a joint venture between steel company SSAB, mining operator LKAB and the utility company Vattenfall. In a world first, Volvo CE recently introduced its first construction vehicle built entirely from fossil-free steel.

In the future, no one will want to buy from companies who rely on supply chains that are detrimental to environmental and social sustainability. 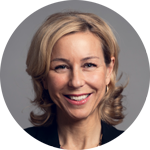 The mining sector has an important role to play in supplying metals and minerals that are crucial in technologies enabling continued digitalisation as well as the production of renewable energy and electric vehicles. Sustainable Underground Mining (SUM) is a unique Swedish collaboration across sectors, represented by LKAB (mining), ABB (power generation and transmission) Epiroc (mining equipment), Combitech (defence), and Volvo Group (transportation).

"The goal is to create a sustainable value chain all the way from mining to finished products, which is what manufacturing companies of today ask for when sourcing", says Aglert, adding: “In the future, no one will want to buy from companies who rely on supply chains that are detrimental to environmental and social sustainability.”

Digitalisation and electrification have transformed modern mines into a safer and cleaner workplace. The same can be said for the final stage of the value chain; the factories where industrial goods are manufactured. Industry 4.0 is characterised by automated, seamless production where machines communicate via the Internet of Things, frequently enabled by 5G technology from Ericsson.

Elsewhere, the need for sustainable public transport keeps growing in the wake of increasing urbanisation. Sweden's Scania and Volvo are at the forefront in developing buses that run on biofuel and fit into the concept of BRT, Bus Rapid Transit, which means higher capacity, shorter travel time and less congestion. Biofuels play an important part in replacing diesel and may be produced from local waste, thus contributing to a circular society.

Efficient power storage and transmission are key factors in increasing the use of renewable energy from intermittent sources such as wind and solar. Swedish technology is, for example, used for transmission from the world’s largest offshore windfarm Dogger Bank in the North Sea, and in Africa’s largest solar farm facility in Angola. Both projects are backed by the Swedish export credit system.

“At EKN, we believe we can add real value to any complex project by bringing experience from a range of different industries on every continent,” says Aglert. “As a government agency in one of only ten triple-A rated countries, we help you lower your risk and offer customers more competitive financing and cheaper funding.”

Trade up to better deals and lower risk

Get in touch with us today to learn more about how Sweden’s export credit system can help you lower your risk and offer more competitive financing by sourcing from world-leading suppliers.

Make a sustainable impact on your business

Get the full perspective

EKN Magazine brings you the inside perspective on the latest international projects, from tendering to procurement and financing.