Making sure that your clients source Swedish suppliers is a good way to boost the sustainability profile of the project you are financing and speed up the transition to a fossil-free world. Getting access to the competitive terms offered by the Swedish export credit system makes a good deal even better.

There is little doubt that climate change will remain on top of the agenda for many years to come. According to the latest Intergovernmental Panel on Climate Change (IPCC) Report, scientists are observing changes in the Earth’s climate in every region and across the whole climate system. But, the report states, “strong and sustained reductions in emissions of carbon dioxide (CO₂) and other greenhouse gases would limit climate change.”

With corporations and financial institutions having a key role to play in the transition to a fossil free world, the Swedish government has launched a cross-sector initiative called Fossil Free Sweden, which spans businesses, academia, municipalities and government agencies.

Fossil Free Sweden’s goal is to create “the world’s first modern fossil-free nation by 2030.” Achieving this may be a recipe for export success, says Svante Axelsson, National Coordinator at Fossil Free Sweden, who points to a strong track record for Sweden: “We have managed to cut climate-affecting emissions by 29 percent since the 1990s,” he says. “And the transportation sector now has the goal of reducing 70 percent of its greenhouse gas emissions in 2030, compared to 2010.”

Sustainability used to be seen as a cost, now it’s a ticket to the hearts of financial markets, investors and consumers across the world 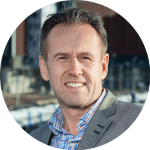 Sustainability is not just a must, it’s a business opportunity – for individual companies as well as exporters and their financiers, Axelsson points out. “The extent to which a supplier or a bank contributes to a solution to the climate crisis affects market value as well as reputation,”  he says. “Sustainability used to be seen as a cost, now it’s not just a necessity, but a ticket to the hearts of financial markets, investors and consumers across the world.” Fossil Free Sweden has launched 22 roadmaps for industries where Sweden has a strong track record in exports, such as steel production, transportation and mining equipment. “These roadmaps are a world-first that help speed up the necessary transition and rate of innovation,” says Axelsson. “Our domestic market is small, which makes it necessary to focus on export markets early on, prompting innovation that leads to world-leading new solutions that can succeed on the export market.”

In steel production, for example, which accounts for 25 percent of Europe’s industrial CO₂ emissions, Swedish steel producers and miners are lining up to launch fossil-free steel. One example is Hybrit, a cooperation between LKAB and SSAB. Another is H2 Green Steel, where Chief Technology Officer Maria Persson Gulda says that decarbonisation is a must for the industry.

“H2 Green Steel will be a fully integrated, digitalised and automated greenfield steel plant,” says Persson Gulda. “By bringing together raw materials, renewable energy, leading expertise and artificial intelligence, we aim to bring emissions down to zero. Implications for the transportation industry are far-reaching. Electrification was the first step in reducing carbon dioxide emissions, the next step is to build vehicles from high-quality fossil-free steel.”

Technology for the transition

Swedish companies hold a prominent position in meeting the global demand for the technology that is needed for the transition to fossil-free industry, while promoting sustainable business from a wider perspective.

Scania and Volvo (trucks and buses), Ericsson (telecom), LKAB and SSAB (steel and raw materials), Sandvik and Epiroc (mining and tools) and other Swedish export giants frequently cooperate with EKN to be able to offer their customers competitive financing solutions.

“For many years, the Swedish export credit system has contributed to their long-term competitiveness. We are committed to being a positive force in the transition towards a sustainable economy,” says Marie Aglert, Director Large Corporates at EKN

Trade up to better deals and lower risk

Get in touch with us today to learn more about how Sweden’s export credit system can help you lower your risk and offer more competitive financing by sourcing from world-leading suppliers.

Make a sustainable impact on your business

Get the full perspective

EKN Magazine brings you the inside perspective on the latest international projects, from tendering to procurement and financing.